IMPORTANT: It's a Serious Matter of Life

Dear Roger,
I was just reading Romans 12:1-2, where Paul says that total devotion to Jesus Christ is our spiritual worship. I sensed that Paul was talking about a level of worship that I have never experienced. Help me understand. I'd like to move deeper in my worship.
Sincerely, Roscoe

I’ve studied the Scriptures about worship many times over, and every time, I conclude that the kind of worship God calls us to is what we might call “Whole-Life Worship.”

In Romans 12:1-2, the apostle Paul summarizes this key teaching:

Therefore, I urge you, brothers and sisters, in view of God’s mercy, to offer your bodies as a living sacrifice, holy and pleasing to God—this is your true and proper worship. Do not conform to the pattern of this world, but be transformed by the renewing of your mind. Then you will be able to test and approve what God’s will is—his good, pleasing and perfect will.

Let me make this concept very simple. We can't live any way we want to from Monday through Saturday and expect to come to church on Sunday ready to worship. One of my favorite preachers, W.A. Criswell, said it this way: “You can't live skim milk all week and preach cream on Sunday.”

Worship like this is what Paul means by the term “living sacrifice.” We make the choice to live according to God’s will and His Word, no matter the cost. In this way, we truly honor Him.

How Do We Practice Whole-Life Worship?

Three specific instructions in Paul’s teaching stand out. Let’s examine each in turn:

First, Offer Your Body as a Living Sacrifice

The term Paul uses for “body” represents our everyday lives: our talents, possessions, physical makeup, dreams, intellect, personalities, emotions, todays, and tomorrows. It’s the very essence of who we are.

Paul is saying that we are to present our bodies to God, like a priest presented the sacrifice in the Old Testament. He laid it on the altar, backed away, and God took over, consuming the entire sacrifice with fire.

Everything we do is to be an act of holy sacredness unto Him.

Note that in the Jewish religious system, the priests never put a living animal on the altar. It would try to crawl off and run away!

However, this is exactly what God asks us to do. He wants us to lay down our lives, remain on His altar, and sacrifice ourselves on the cross with Jesus.

Let me make several observations about what self-sacrifice might entail.

God asks for our “bodies,” not our time, talents, money, or anything else. He says, “Present yourself! I want you!”

Next, wholeheartedly surrendering our entire selves to Jesus is a matter of choice. We must consistently choose to follow Jesus at any price.

In fact, saying, “Lord, I give you my life,” is not an emotion; it is a decision. Make a wholehearted decision to stay on the altar and then don't try to wiggle off. Jesus will consume your sacrifice.

Once upon a time, there was a divorced father who was raising his only son.

His boy was a handful. He was kicked out of three private schools before they found one that would accept the son on the condition that the dad spend a volunteer day at school helping children once every three weeks.

The dad’s volunteer day arrived, and he didn't want to go. So, he purchased several hundred dollars worth of toys and returned to work. Shortly thereafter, all of the toys were returned to his office.

Attached was this note: "As a gift, it is too much. As a substitute for yourself, it is not nearly enough."

The problem with many of us is that we're trying to pass off part as the whole–-and God will never consume a partial sacrifice.

Cain learned this lesson the hard way. Abel brought the full sacrifice, and God accepted it from the altar by fire. Cain brought an incomplete sacrifice and it rotted on the altar.

Now, a living sacrifice is to be a final sacrifice.

The term "present" or "offer" in the original language means to do something once and for all.

Paul is writing to people who have been saved for years, but who are still struggling with total commitment. It’s like Jesus is saying, “I want you to make a once and for all commitment to me."

Many Christians keep falling into sin because when faced with temptation, they have to decide all over again whether or not to sin. They’ve failed to drop a stake into the ground. Driving stakes into the ground becomes itself an act of worship. 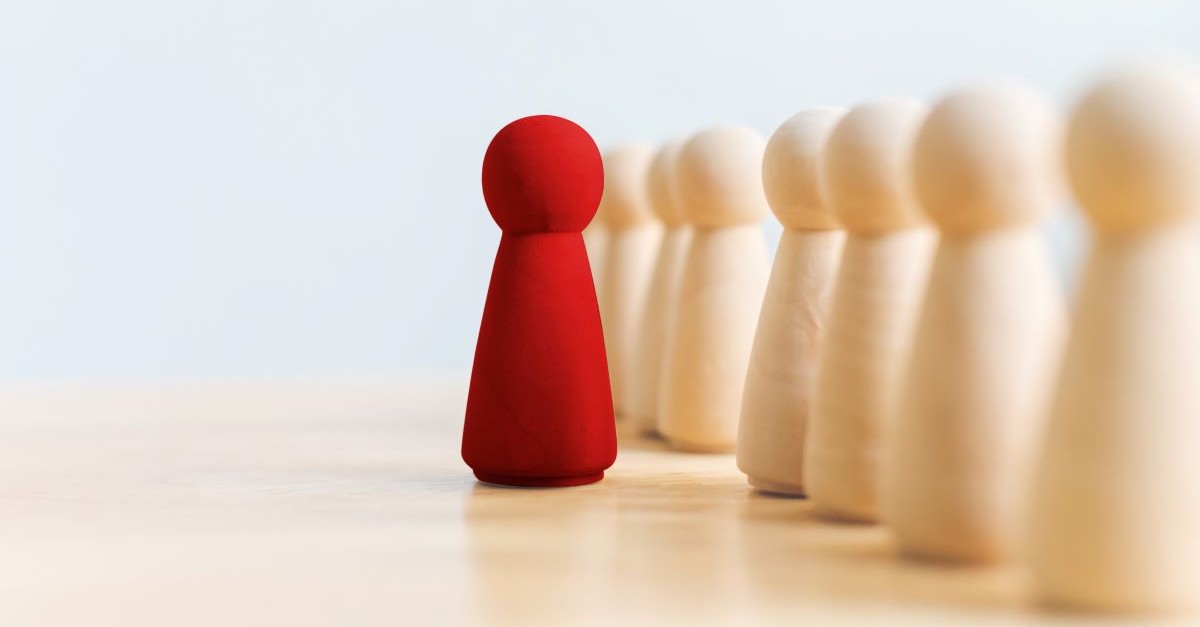 Second, Do Not Be Conformed to This World

In other words, stop following the patterns of this world. Literally, in Greek, the words mean don’t conform to the "the schemes of this age."

The essence of the “world” never changes. The “world” may manifest in various ways, but underneath the façade is still the same sin-filled, broken place. The temptation to yield to the world’s system is an everyday battle.

The temptations of the world are many. Watch out for things like self-reliance and self-centeredness, which are the essence of pride. Lust is sneaky; gluttony is widely accepted, even encouraged. Laziness and selfishness are par for the course.

Let me give you the preeminent biblical description of the man who started strong and ended conformed with the world.

In Paul’s letters, God gives us three snapshots of Demas, three points on a graph, which show him drifting rapidly downward from “fellow worker with Paul” to an apostate who has conformed to the world.

The first snapshot is in Philemon 23-24: “Epaphras, my fellow prisoner in Christ Jesus, sends you greetings. And so do Mark, Aristarchus, Demas and Luke, my fellow workers.”

Demas is a “fellow worker” with the apostle Paul. There are a few honors better than that. He is in the company of spiritual giants.

The second snapshot shows him beginning to slip: “Tychicus will tell you all the news about me. He is a dear brother, a faithful minister and fellow servant in the Lord. … Epaphras, who is one of you and a servant of Christ Jesus, sends greetings. He is always wrestling in prayer for you. … Our dear friend Luke, the doctor, and Demas send greetings” (Colossians 4:7, 12, 14).

Eight individuals are mentioned in this passage, and it is no accident that seven of them are pointed out for some good work while Demas is passed over in silence. I believe that at this juncture, Paul was beginning to suspect that something was wrong with Demas.

The third snapshot is 2 Timothy 4:9-10: “Do your best to come to me quickly, for Demas, because he loved this world, has deserted me and has gone to Thessalonica.”

I’ve noticed that it’s easy for Christians to be like Demas. Many begin with Christ, but then some comfortable corner of this present age invites us and we nestle down. Our Christian profession lapses and we do not amount to much in the end for Jesus.

If I should accuse some of us of being Judas, we would be indignant. We would never deliberately sell out. But Demas, how many of us have been like him?

Third, Be Transformed by the Renewing of Your Mind

The term Paul uses here for “transform” comes from the Greek word "metamorphous,” which means to change or morph into something else. In this context, Paul is teaching that we are changed into completely new creatures in Christ. As such, we have minds which no longer see as the world sees. We now see as Jesus sees. Our hearts are in tune with His.

Remember that God does not take us out of the world; He allows us to remain as a witness to our Savior and to bring Him glory. And as our minds are made new, we begin to experience “Whole Life Worship” and an intimacy with Christ like we never knew before.

Well, I hope my answer will help to guide you into deeper dimensions of worship.

Dr. Roger Barrier retired as senior teaching pastor from Casas Church in Tucson, Arizona. In addition to being an author and sought-after conference speaker, Roger has mentored or taught thousands of pastors, missionaries, and Christian leaders worldwide. Casas Church, where Roger served throughout his 35-year career, is a megachurch known for a well-integrated, multi-generational ministry. The value of including new generations is deeply ingrained throughout Casas to help the church move strongly right through the twenty-first century and beyond. Dr. Barrier holds degrees from Baylor University, Southwestern Baptist Theological Seminary, and Golden Gate Seminary in Greek, religion, theology, and pastoral care. His popular book, Listening to the Voice of God, published by Bethany House, is in its second printing and is available in Thai and Portuguese. His latest work is, Got Guts? Get Godly! Pray the Prayer God Guarantees to Answer, from Xulon Press. Roger can be found blogging at Preach It, Teach It, the pastoral teaching site founded with his wife, Dr. Julie Barrier.

Pastor Roger Barrier's "Ask Roger" column regularly appears at Preach It, Teach It. Every week at Crosswalk, Dr. Barrier puts nearly 40 years of experience in the pastorate to work answering questions of doctrine or practice for laypeople or giving advice on church leadership issues. Email him your questions at [email protected].

This content first appeared on Crosswalk.com and is used here with permission. To view the original visit: https://www.crosswalk.com/church/pastors-or-leadership/ask-roger/how-do-we-worship-jesus-with-our-whole-lives.html

Anything Is Possible with God - iBelieve Truth: A Devotional for Women - June 27